Please see the list of the topics I've covered. It's located near the bottom of the page. Thanks for stopping in!!

karl
I am an Engineering Technician by trade, and hold a Master's degree in Applied Technology. I also hold an EMT-Basic certification, having earned my patch in 2017. Currently I work in industry as an electronic technician and do occasional volunteer work. 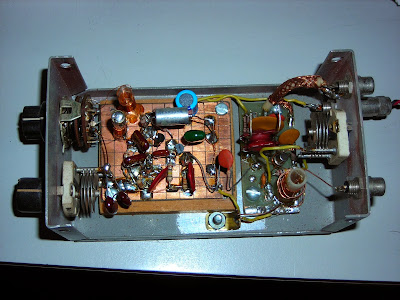 I built this about 27 years ago to receive international shortwave broadcasts through a car AM radio. This circuit tunes the 9.5 to 10 MHz and 12 - 12.5 MHz shortwave bands. Back in the day I would listen to the BBC World Service, Radio Canada, Radio Moscow, Deutsche Welle, Radio Australia, and many others. Radio France gave excellent reports on the radiation cloud that rolled across Europe from the Chernobyl mishap in 1986. Several times daily, they would read off a list of all the major cities in Europe, along with the radiation levels in each one. I was "glued" to my radio following the progress of this. The information was of good enough detail and quality one could actually plot it on a map, graphically monitoring the progress of the situation.

The VFO and mixer circuits were taken from the 1979 issue of the ARRL Radio Amateur's Handbook. I built them from the publshed schematics, then tweaked some of the component values for better performance. The VFO coils are wound on glass 3AG fuses that had their elements removed. I heated the end caps with a soldering iron, removed them, took out the fusable element, and glued the caps back on. Then I wound the coils using #28 magnet wire, using the metal caps to solder the wires onto. I used Bohning "Fletchtite" archery glue to secure the windings so they wouldn't move. The variable capacitors were very old, surplus units bought I-can't-remember-where. Looking at the left-hand-side of the photo: The control on the left-hand front of the box is the band selector switch. Next to that is a variable capacitor used to tune in stations. On the rear of the box (in the right-hand-side of the photo) there is a solitary variable capacitor used to tune the antenna for whichever band one is listening to. The whole unit is built in modular form - the VFO has its own board and the mixer is on a separate board. This allowed me to develop and refine the system one module at a time. The VFO is built using "ugly" or "dead-bug" type construction. Its circuit board was made by scoring a copper-clad circuit board with a knife into a grid pattern. The mixer board was actually laid out, then etched using ferric chloride solution.

After many years of sitting unused in an RV, being subjected to all kinds of temperature extremes and even a roof leak, this little device still works. Not only does it still work, the tuning has held calibraton!!! It is within 5 or so KHz of where it was when built. This attests to the quality of the components I used to build it, as electronic components generally drift in value with age.

If I can ever find the original schematic I drew, I'll post it in a future blog entry.

Within the past several years, I have heard China Radio International, Radio Australia, various Spanish-speaking stations, etc. on this unit. Regrettably, the BBC has gotten away from broadcasting quality news programming on shortwave, instead focusing on satelite broadcasts aimed at various target audiences - telling them either what they want to hear or whatever the Powers That Be WANT folks to hear.

To use the converter, simply tune the car radio to an empty spot on the AM dial between 1.40 and 1.55 MHz. Connect the converter between the external antenna and the antenna input on the radio. The converter runs on the car's 12 volt supply; an internal zener diode regulates the supply voltage for the circuit to 9 volts. Use the band selector switch to choose the band to listen to. Reach around the back of the box and turn the peaking control for maximum signal. Then simply tune the right-hand front panel control to tune around for a station. The lower band - the 9.5-10 MHz band, offers the WWV time station from Ft. Collins, Colorado. These WWV signals are very useful not only for checking your watch, but also the RF and audio signals provided are extremely accurate and may be used for equipment calibration. WWV may be heard on 5, 10, 15, and 20 MHz - these broadcasts are done around the clock, 365 days a year. Again I mention those because they are an excellent way of checking the calibration and even the operation of a shortwave radio. Basically, if you can't hear WWV, you will likely NOT hear much else, either.

Soon, in a future post I will delve into the features to look for when buying a shortwave receiver and what to listen for on your radio.

Constructive comments are welcome! Spam, or any abusive or profane comments will be deleted.